What is it to tell a story? And how does this relate to the different kinds of research we are doing? Once again, a group of brave scholars set out for a two-and-a-half-hour STS Talk-Walk in the English countryside to discuss these and other challenging questions. In addition to the InSIS contingent, a number of people from other departments and universities joined us this time. Andreas, Lauren and Fadhila had made it over from the Oxford Internet Institute, and Andy had come all the way from Durham. 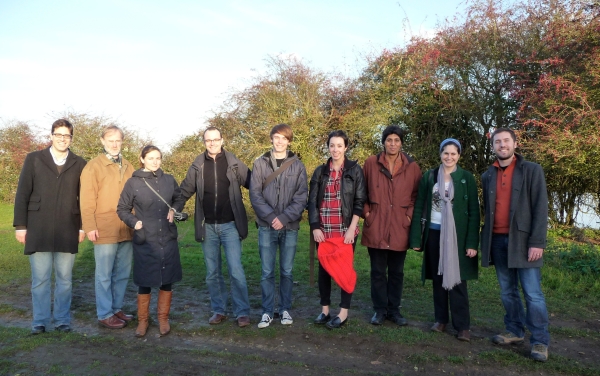 As usual, the talk-walk triggered interesting thoughts. One example were the ways in which storying turned out to be a useful trope for thinking about all kinds of research accounts. Story-telling, it was argued, is not just relevant for ethnography and what are sometimes called ‘qualitative’ approaches, but also more formal methods like surveys, econometrics or social network analysis. Each of these cases requires a set of characters, a plot and a narrative point of view to be written up. Another focus were the different layers of storying. As ethnographers, for example, we tend to pick stories from our fieldnotes, weave them into a larger story for the argument and at the same time try to craft a story about ourselves as smart and capable authors. We further talked about techniques of storying, including sequencing, interruption and suspense. We got increasingly puzzled when wondering what actually distinguishes a good novel from a good ethnography. And we talked about our difficulties in imagining and coordinating different audiences. What does it mean to be ‘honest’ in storying? How to end a story and achieve some form of closure? And whose stories are they anyway?

Interestingly, the stories told after the talk-walk had less to do with the intricacies of story-telling than with the thick crust of mud on our shoes. We had just passed Wolvercote when we were confronted with an ‘obligatory passage point’: a big and muddy puddle opened up in front of us and blocked our way. As you can see, some of us mastered this challenge with unexpected elegance.

2 thoughts on “The (second) STS Talk-Walk: Storying – what is it to tell a story?”