The eighth installation of the STS Talk-Walks revolved around the theme of visualisations and visualising. What practical work goes into creating visualizations and making them travel? Who, which or what is actually being visualized? What are the risks involved in visualizing? How come that ‘visualization’ has gained such currency? Has it, actually?

Whether it was due to the all-too-familiar visualisation of ‘heavy rain showers’ on the BBC Weather homepage or not (the grey icon almost scared this writer off), the turnout was not overwhelming this time. However, the happy three that ventured out in the rain were rewarded with great conversational depth and a very tolerable amount of rain. Here follows a necessarily incomplete and biased story of how it went, but really this image says it all (or does it?): 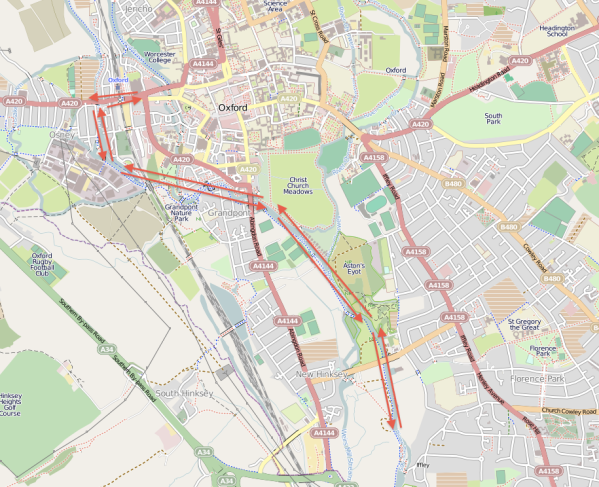 Walking downstream on the Thames Path from Said Business School, we started by noting how the term ‘visualisation’ is claimed by a confusing collective of actors. It is taken to mean anything from diagrams that sum up texts or ideas to digital stepping stones that have become integrated into how scientists proceed in laboratories. It was suggested that while this diversity makes it hard to run smooth conferences under the visualisation banner, it could also be cast as a powerful unifying concept. Further to this, one participant pointed out how a visualisation in itself can work as a focal point around which people with different interests are able to gather. Interestingly, our shared everyday language also seems to contain a throng of hints to the visual, as is for example ‘illustrated’ when politicians talk of the need for ‘transparent’ institutions and ‘clear’ policy making.

Later, a halfway pint at the cosy Isis Farm House became instrumental in discussing the concept of affordances and the ontological status of those environments that present themselves visually to us. None of the participants were entirely comfortable employing the notion of affordances (which has also been used by a very diverse set of writers), but it was useful for trying to get at what it is that might make visualisations appear so powerful in comparison to for example texts. Perhaps there is something more immediate about the way that we relate to the visual? This argument was only hesitantly accepted, though, with some unexpecting readers suggesting that they reacted in a highly emotional and instinctive way to the final passages of the novel ‘The Road’ by Cormac McCarthy. In this case the text seemed to have powers equal to the most arresting (in the Barthean sense) pieces of visual art.

During the walking and talking, we several times found ourselves reflecting on the recent InSIS conference Visualisation in the age of computerisation. For example, the keynote by Peter Galison was useful for thinking about how different styles of attaching truthfulness to scientific visualising have emerged over the last three centuries. The idea came up that if digital visualisations are gaining currency in our times, it might have to do with the classic statistical logic of attaching value to representations that sum up large amounts of data.

It turned out that more than one of the talk-walkers were doing current work in which they encountered the practicalities of visualizing, so this occasion to discuss was warmly welcomed. Whether some of the thoughts that were generated at the talk-walk can be transferred from the field of the Thames Path to the field in which visualising work is carried out remains to be seen.