New information and communication technologies (ICTs) increasingly enable social action and civic organisation, on both local and global scales. Within these fast-growing digital platforms for activism, food-related consumer action is gaining new contours and publics. In this workshop, we will examine and aim to define the emerging field of digital food activism, exploring how consumer-ICT interactions generate new knowledges and practices in relation to food. With invited talks by scholars studying food, new media and/or social activism, the workshop will critically analyse and assess how consumer activists, non-governmental organisations and social entrepreneurs use ICTs to facilitate new or alternative forms of engagement with food and how media, corporations, academia and government agencies respond to or mediate these engagements. The workshop will build on and extend the rich literature on food activism and critical food studies by asking what happens when food goes digital.

Attendance is free, but registration is essential. Please RSVP by 19 November at:http://goo.gl/forms/5m1Wdg6ub5. You will receive an email to confirm your place by 20 November.  Please direct all enquiries to oxfordobesity [at] gmail.com. 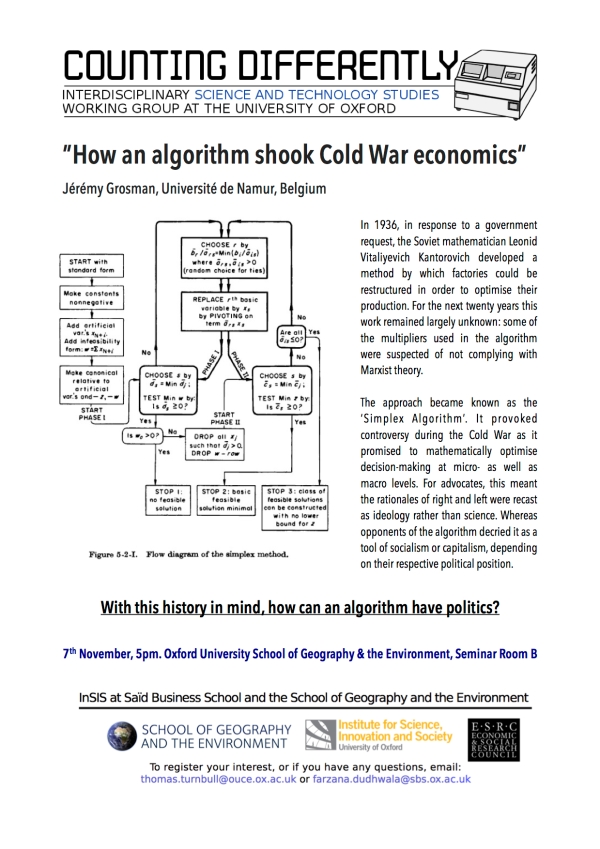 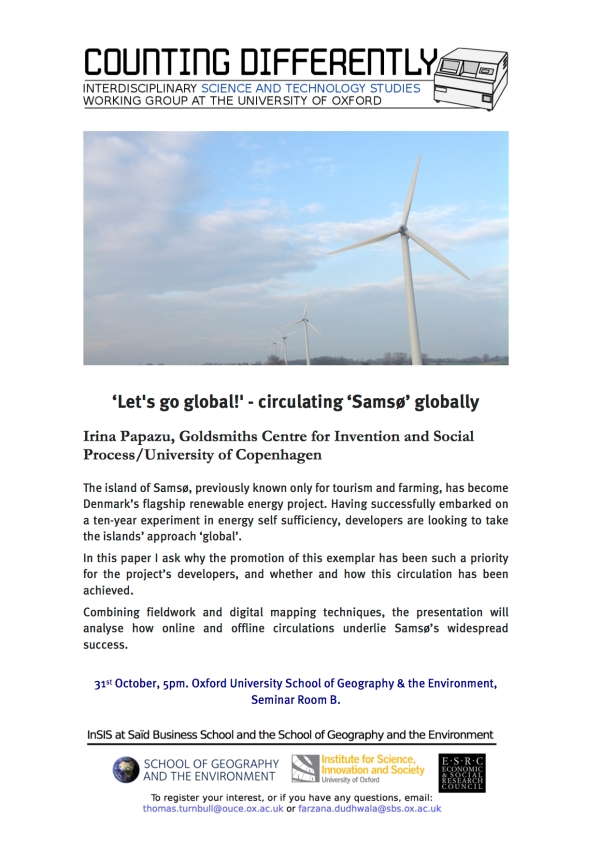 Connected Life is a new conference designed to foster collaboration and promote emerging Internet research. The conference is organised by students at the Oxford Internet Institute who are inviting students and faculty from across disciplines to join them in a day of presentations and discussions about digital issues from across the social sciences.

They are calling for the submission of materials on topics such as (but not limited to):

– Analysing Social Interactions on the Internet

By Farzana Dudhwala and Thomas Turnbull

Last week Will Stahl-Timmins, an associate research fellow at the European Centre for Environment and Human Health (ECEHH), based at the University of Exeter, presented his thoughts on the visual presentation of data and information.

From the very first slide we knew we were in for a treat. Despite a flurry of recent interest, Will pointed out that effective visual representation was nothing new.  Will showed us a picture of what statistician Edward Tufte has argued is “probably the best statistical graph ever shown”: Charles Joseph Minard’s (1869) depiction of the losses suffered by Napoleon’s army in 1812 . This ‘statistical graph’ is often hailed as a lesson in how visual communication should be done:

Will then showed us another example of presenting data visually. Florence Nightingale’s “Diagram of the Causes of Mortality in the Army of the East” (1858) is often cited as an  example of objective data communication. However, as only a graphic design practitioner could, he pointed out how this seemingly ‘objective’ visualisation was in fact tweaked to turn it into a rhetorical device. 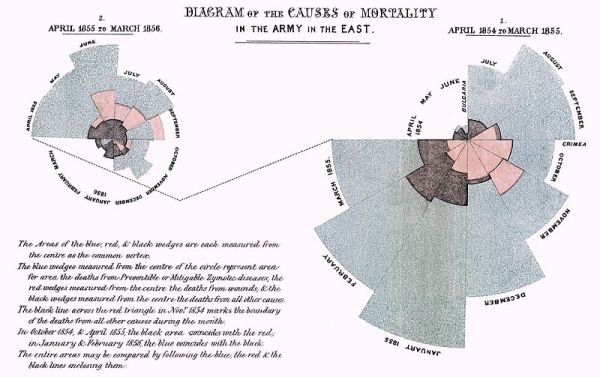 In Nightingale’s diagram, people often assume that the area of the wedge is proportional to the figure it represents, but this is not the case. In fact, the figures are represented by the radius of each piece of the circle – not nearly as intuitive (at least not for people in cultures where the area is the intuitive conclusion rather than the radius). The effect emphasises the extent of disease driven fatalities, at the expense of combat fatalities. Nightingale’s Rose, as the diagram is sometimes known, can certainly mislead; though of course in her case this was done with the best of intentions.

After an informed introduction to the world of visualisation, Will put on his other hat to speak about the role of data visualisation in academia. Often, he explained, his work for the European Centre for Environment and Human Health involves dealing with what he calls ‘excited scientist syndrome'(!). This is the entirely understandable enthusiasm of the expert scientist when they feel they have come across an exciting data-driven insight. Will’s job is to visual render the enthusiasm of the expert in such a way that the non-expert can become equally excited.

So, when Will received a visit from a colleague suffering from excited scientist syndrome, he was able to translate their enthusiasm about the – as yet undocumented – relationship between climate change and pharmaceutical use into an effective and informationally rich indicator (the paper that came out of this can be found here, and the resulting graphic can be seen below):

Will also spoke about the ‘Pharma Town‘ project, an attempt to map the flows of pharmaceuticals through the environment. A visualisation he created in the middle of a study acted as a focus point, around which his fellow researchers could direct their expertise, and point out where probable diffusions and flows might, or were known to, occur. They used the visualisation as a tool to think about new ideas and ways of sharing knowledge. In other words, as Will told us, the visualisation revealed hidden connections in the work and allowed them to be brought to the fore. This is very much in line with Michael Lynch’s argument (see below for a link to Lynch’s paper) about how pictures can “transform  previously hidden phenomena into visual displays for consensual ‘seeing’ and ‘knowing’” (1988:203).

In another example, Will showed how reams of spreadsheet data can be transformed into icon driven and aesthetically pleasing images, which can convey some of the excitement that the scientist feels in their own work. The images also work as a useful visual heuristic for the scientists themselves. So, for example, a large quantity of clinical trial data can be summarised visually, digested rapidly, and, in some cases, remembered more accurately. Will is looking to automate the visualisation process, which would no doubt be of benefit to busy health professionals.

The flip-side of the visualisation process is assuring that the exciting this rendering still accurately portrays the science which it communicates. So Will’s relationship with the science he translates is based on trust, and his own understanding of the research he conveys.

Further academic robustness comes from the fact that Will and his colleagues are work to empirically test the effectiveness of information visualisation. Using relatively large subject samples, they have empirically tested how effective various forms of visualisation are at appealing to, communicating with, and sticking facts into human brains. Their initial findings seem to point out that for certain demographics visualised data is more appealing, more quickly digested, and better remembered.

Will’s talk, as hoped and expected, sparked a number of interesting questions and discussions. Here is a selection of those that were particularly thought-provoking:

Will also kindly gave us a resource list to draw upon if we wanted to find out more about how to create data visualisations ourselves, or if we wanted to see some examples of other people’s visual work.

The two programming languages he mentioned are:

Some useful websites are:

And  some conferences too:

And lastly, In case you missed it, we had suggested two readings for the group which are particularly relevant to Will’s talk:

The group will meet again at 12.30pm on November 29th at the Said Business School in Seminar Room 13, where we will welcome Dr Anthony Garnault from the Department of Contemporary China Studies at the University of Oxford. He’ll be talking about social surveys in the twentieth century, and will be questioning what the ‘typical’ represents. We’ll be sending out a couple of suggested readings shortly, so watch this space! (A full list of seminars and activities can be found here).

Great news: we have finalised the list of speakers for this term!

At the first meeting, Maan Barua, School of Geography and the Environment, University of Oxford, will talk to us about ‘Circulating Elephants’. Please join us over some lunch and refreshments for what is due to be a great presentation and some stimulating discussions.
Inaugural STS Oxford Working Group Meeting:

We hope to see many of you there!

We are pleased to announce a new ESRC-funded interdisciplinary Science and Technology Studies working group. The aim is to establish a network of researchers interested in STS to convene once a fortnight to read, discuss and present about research and ideas on the broad topic of ‘counting’. The theme is intentionally broad to allow a diverse range of STS-inspired discussion about: What counts? Who counts?  When does it count? Where is it counted? Why should we count it at all?

Researchers with an interest in STS, regardless of disciplinary background are welcome. More details about speakers, seminars and dates to be posted soon. To register your interest, suggest a talk, or if you have any questions, email: 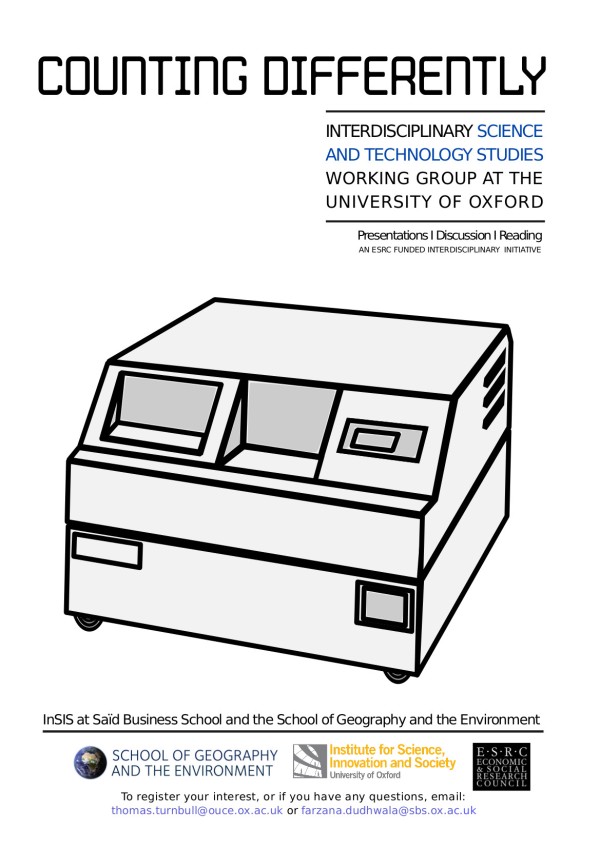